I am the big bang
Staring far back at itself
With stars in its eyes.
– D.L

It has been a deep year of shifting, growing, and introspection for me. Maybe because of my past connection to the mainstream Heathen community and its general suspicion of UPG it’s been a long time since I’ve written something that wasn’t primarily research oriented or shared anything about my personal contemplations. I’ve reached a point where my Germanic spiritual practice (while being informed by other traditions in which I have been trained) revolves around Loki and his extended family and the worldview that focus gives me. I’ve decided to share and record some of my own more abstract beliefs and musings that mostly have sprung from personal gnosis. I say that as a disclaimer so there’s no confusion that I’m claiming any kind of historical purity within this next series: but I also don’t want my spirituality to become so stagnant that it’s only bound by scholarship either. I want to begin by talking about a concept that has become very important to my own practice: Ginnungagap.

The concept of the void as the original state of creation is described in Völuspá, where’s it’s referred to as gap var ginnunga (most often interpreted as “the void that was yawning”).

“3. Young were the years when Ymir made his settlement,
there was no sand nor sea nor cool waves,
earth was nowhere nor the sky above,
chaos yawned, grass was there nowhere.” (Larrington, 6)

Interestingly, Rudolph Simek has this to add:

“Ginnungagap is difficult to interpret etymologically. De Vries has shown in a detailed study that Ginnungagap is more likely to mean ‘the void filled with magical (and creative) powers’ than ‘the yawning void’.” (Simek, 109)

So at the very beginning it seems that universe was in a state of black, undifferentiated chaos. When I use the word Chaos I’m speaking of a state of creative potential, not disorder. This is a state that’s difficult to wrap one’s mind around as a (seemingly) differentiated being having a subjective experience. There is no hot or cold, no up or down, no existence whatsoever: for the second something exists, you have also created a differentiation between existence and non-existence and have therefore created duality. Ginnungagap is the pure state of Zero: no duality. Pure unification.

From a scientific perspective, this very much seems to be the state in which our universe began. According to the cosmologist Lawrence M. Krauss (and I am greatly simplifying here) we live in a flat universe, in which all of the negative particles combined with the positive particles in the universe equals out zero. In other words, the universe literally sprang from nothing and at its mathematical core still is nothing. As Tor Norretranders puts it in The User Illusion:

In my own spiritual training, the closest idea that touches the meaning of Ginnungagap is Quakoralina (the “Star Goddess”) of the Anderson Feri Tradition: who Victor used to call “Cliterophallic God Herself”. This black void of potential is personified as a hermaphroditic female because it so closely resembles the womb (or egg) that is the norm in females, but creates spontaneously and without aid (for Nothing holds all potentialities). It is the primordial emptiness in which activity and life gestates and comes into being. Not only is the Void symbolized by the creative womb, but also by the mouth that speaks existence into being.

In the Feri Tradition, creation begins when the Star Goddess falls in love with Her own reflection in the black mirror of space and makes love to Herself: tearing her image out of the mirror. There are also versions of this myth where she becomes impregnated with the Sacred Twins: symbolic of the duality in nature and in our own lived experience. The Sacred Twins are born from Ginnungagap as well in the form of two completely opposite realms: first Muspelheimr, the world of fire, appears spontaneously in the South (according to Snorri):

“But first there was the world in the southern region called Muspell. It is bright and hot.” (Snorri, 9)

Secondly, a world of ice appears in the North called Niflheimr “the dark world”:

“It was many ages before the earth was created that Niflheim was made, and in its midst lies a spring called Hvergelmir, and from it flows the rivers called Svol, Gunnthra, Fiorm, Fimulthul, Slidr and Hrid, Slyg and Ylg, Vid, Leiptr; Gioll is next to Hel-gates.” (Snorri, 9)

Once the void has created one thing, it’s opposite appears: the state of Zero has divided and now appears to be two. The creation of even one thing within the void has now created duality, because once something exists, its opposite: nothing, also now exists. Muspelheimr (which will receive an examination all on its own) is the first flash of light in the universe: the first explosion of illumination and wakefulness. It is literally the explosion of light produced by the big bang. It is pure fire, pure energy, pure activity, pure life, pure consciousness in its most heightened state. It is the spark of life that fills matter, but is not matter itself. It is in such a high, accelerated state of fiery power that nothing can survive there that doesn’t belong to that world by birth:

“That area is flaming and burning and is impassable for those that are foreigners there and are not native to it.”

The Sons of Muspel, including Surtr and I believe Loki’s father Fárbauti, appear to be the first conscious beings that exist in this empty landscape. These are beings of pure light and consciousness who are so close to the Void and so powerful in its devouring attributes that the only time they leave Muspellheimr and interact with outlaying worlds it is to devour them back into the Void from whence all things originally came. These powerful beings of light are the flash consciousness appearing in the universe, and the sparks of that world are what inadvertently grant life and consciousness to all sentient beings. They are in alignment with the Luciferian current: literally the light bringers of the 9 Worlds.

Conversely, Niflheimr is the opposite potentiality that existed within Ginnungagap before it split into two: Niflheimr is ice, stagnation, unconscious matter without life, pure material building blocks, death. Because this primal ice is the very first seed of material creation it holds the most ancient memories of the past: perhaps this is why the Hrimþursar (“Frost Giants”) are considered to be such repositories of ancient wisdom even by Óðinn. As Niflheim is a a material but unconscious world, it seems no surprise that it is also linked to the world of the dead in Old Norse thought, and is the realm that Óðinn casts Hel, Loki’s daughter and the goddess of death, into:

“Hel he threw into Niflheim and gave her authority over nine worlds, such that she has to administer board and lodging to those sent to her, and that is those who die of sickness or old age.” (Snorri, 27)

Both of these states by themselves can’t sustain life as we know it, but when they unite consciousness/life impregnates matter and the two are able to create solid, sentient beings. It is worth mentioning that the pictographs of the Runes, the building blocks of all creation that are present in the Void from the beginning, can all be created with the Elder form of the runes Kenaz (“torch”, “fire”) and Isa (“Ice”).

The first of the sentient, physical beings formed from this union are Ymir and Auðumbla, who I’ll be discussing in my next article. While on the surface all of these beings and states seem to be separate from each other and the Void, this is really just the illusion of separation. Just as in our model of the flat universe, Muspelheimr (the world of positive, masculine/expansive energy) + Niflheimr (the world of negative, feminine/receptive energy) still equals out to Zero. Consciousness is an experience that is born out of this original creation. All of creation from the big bang onward has led to this moment where you and I: sentience pieces of the Void can now look back at ourselves in the mirror of creation:

“‘There is no out there’, was John Wheeler’s summary of what mankind knows in the light of what quantum mechanics has told us. He likes to illustrate this idea with a sketch which describes the fact that we are participators in a universe rather than mere observers; we are participant-observers, as Wheeler calls it. Our observations help to create the universe we are observing. The sketch consists of a large U, where one ascender bears an eye that is observing the other ascender. We can express Wheeler’s idea another way: The universe began when nothing saw itself in the mirror.” (Norretranders, 353) 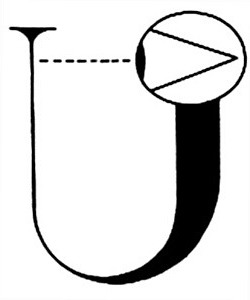 The purpose of meditation in many traditions is to release the personal ego (the subjective experience of self that we perceive ourselves to be) and re-identify and experience ourselves as Zero: our mega-self and true identity. It is from this place of unified consciousness that the fullness of universal consciousness becomes available to us: past, present and future. I feel that the personal ego is the self that Óðinn speaks about sacrificing to this greater Self in Hávamál in order to gain knowledge of the Runes:

“138. I know I hung on a windy tree
nine long nights,
wounded with a spear, dedicated to Odin,
myself to myself,
on that tree of which no man knows
from where its roots run.” (Larrington, 34)

This is the reason that non-thought plays such an important role in practices like divination, possession, divine inspiration, clairaudience, channelling, and even casting spells. The voice of the Void’s divine inspiration requires silence to be heard, and it can’t be heard over the voice of our own ego’s prejudices and programming. The act of creating magic of any kind is itself a replication of that first creation on some level. We first attain the state of non-thought (Ginnungagap consciousness), and then use the fire of will (Muspelheimr) with solidified thought-forms to represent what we want to create (Niflheimr).

This realization that we are all cells in the body of the Void presents the interesting conundrum that we can’t effect anything in the world around us without literally effecting ourselves: for good or for ill. One could argue that it is the narrow perspective of ego-centricity that causes the illusion of separation that so often leads to cruelty and suffering. How would be treat this world if we truly believed we weren’t separate from it? While many people look at beings like Surtr, Loki, and his children as forces that only destroy the physical world, one can also encounter them as forces who can help us to devour illusions about our perceived selves in order to reencounter our true Selves in the form of the Void. They are beings of deep wisdom and great gnosis who burn with the Black Fire of the Void and draw all things back to their source: the womb of Ginnungagap, Chaos, the Star Goddess, the Black Virgin of the Outer Darkness. In fact, there is a hint that these specific gods (whether you choose to call them Rökkar, Þursar, or something else) are agents of the Void. The gods may try to hold back the Void, chain it, and contain it, but it always seeks to draw us back in: just as Níðhöggr is always attempting to devour the tree Yggdrasil. A hint to their true nature lies in the fact that they are all linked to the color black in their names or myths: the charred ashes of Muspelheimr and the dark, venomous waters of Niflheimr. For example:

For better or for worse I guess! Hail Ginnungagap and Hail Loki!